Clean a series of links, resolving redirects and finding Wayback results if page is gone. Originally written to aid with importing from ArchiveBox.

Clean a series of links, resolving redirects and finding Wayback results if page is gone 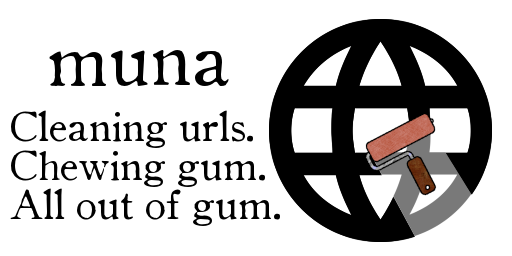 Originally, muna was uniredirector for my program agaetr, but grew to be quite a bit more multipurpose. (The script in agaetr is now enhanced to be identical to muna but in name.

I ended up writing this because of ArchiveBox. It’s a great self-hosted archiving system, but when you throw a random list of URLs (or worse, different types of RSS feeds) at it, you get… mixed results. It does not handle redirects too well, and if something is just 404, you’re out of luck. So I wrote feeds-in to preprocess inputs from both persnickety RSS feeds and a plain list of URLs. It’s included here as a use example of how to use muna and the bash function unredirect.

This project is licensed under the Apache License. For the full license, see LICENSE.

On many linux installations these may already be installed; if not, they’re in your package manager. (If you have to build these from source, you don’t need me telling you how to do that!)

Clone or download this repository. Put muna.sh somewhere in your $PATH or call/source it explicitly.

While this script is included here as an example, it is a fully functional DEATH ST… script. It’s a functional script, appropriate to put in a cronjob to preprocess sources of URLs for ArchiveBox. Or use it as the base of a script to meet your needs.

One important and super useful note for someone who already has a big list of URLs from some other program: All you have to do is put that text file, one URL per line, in RAWDIR (which you’ll configure here in a second) and that list will be pulled seamlessly into the workflow.

If you are using feeds-in.sh with ArchiveBox, you will need to edit these lines as appropriate for you:

There are several example feeds (starting around line 50). Each strips that particular RSS feed (or XML sitemap) down to a series of URLs, one per line, written in a text file.

The sed and awk strings are left here as an example for these particular kinds of feeds. Feel free to use them as a starting point, but I won’t guarantee they work for your feeds, they just work for these feeds.

The console output here is a progress bar unless there are errors. The text file is time-date stamped to avoid collisions and overwrites.

Then feeds-in.sh calls ArchiveBox to import that list of URLs. Uncomment the appropriate line in this section for your style of installation. Note that the docker-compose and standalone docker commands are quite different; don’t confuse them! (I won’t tell you how I know… sigh.)

If there’s a redirect, whether from a shortener or, say, redirected to HTTPS, muna will follow that and change the variable "$url" (or return to STDOUT) the appropriate URL. If there is any other error (including if the page is gone or the server has disappeared), it will see if the page is saved at the Internet Archive and return the latest capture instead. If it cannot find a copy anywhere, it changes the variable "$url" to a NULL string and returns nothing, exiting with the exit code 99.

Put this line at the top of your script.

Seriously, that’s it. If you edited things in the script to meet your system, then you should be done.