vindauga is a program (and probably daemon) that finds or extracts (if needed) the album art for the currently playing song in mpd, and then displays it in a little window or as part of a conky display.

It is a (largely rewritten) fork of kunst by Siddharth Dushantha. There were some behaviors of kunst that I wanted to fix and improve upon, so I created vindauga. There is also a great debt to this blog post by “Raphael” for the conky bits.

vindauga does not loop on a timer. Instead it waits for mpd to send a “player” event. When it receives a “player” event, it wakes up and takes action. This makes vindauga really lightweight as a daemon.

When vindauga wakes up, it looks at the currently playing track from mpd. It then checks its own cache of album artwork (see below for details), then the music folder, then embedded artwork, then the CoverArt Archive (if the music has the MusicBrainz ID embedded), then Deezer.

If that doesn’t exist, it will use the optional simple_placeholder_images to download a nice picture from online and use that as a temporary album cover.

If that doesn’t exist, then it decodes a built in default album image to the cache directory.

At that point, sxiv or conky can display the image.

The filestructure in the cache is meant to be fairly straightforward and obvious so that the images may be used (if desired) with other programs.

This project is licensed under the MIT license. For the full license, see LICENSE.

These may already be installed on your system.

You may have to install these

You do not have to choose all or any of these.

The file vindauga.rc is optional, and goes in $HOME\.config. Do NOT remove the commented lines. The example below has the defaults (if there is no rc file) in place.

As the functionality expands, additional lines may be added to the bottom, allowing for backward compatibility.

The cache - by default in $HOME/.cache/vindauga - stores the discovered and cached album art in the format:

This is deliberately very similar to the way Ario and other programs store the information.

For example, a partial list of my cache is:

When there is a special character - /()& - it is completely omitted in writing the cache filename. This is intentional behavior to minimize the number of times that the program chokes. (Hopefully zero!)

The artist image is likewise obtained from Deezer or Last.fm (if you obtain a last.fm API key and put it in the config file) and stored in the cache directory.

If you use the ffixer_covers.sh file, it will softlink from the music directory. This is obviously superior in terms of space saved.

I have enclosed a basic configuration for conky (as seen in the video above) that has the information and layout that I want. You can obviously incorporate this into your own conky or edit it to your aesthetic delight. Editing conky configurations is well past the scope of this document.

See the file vindauga_conkyrc for the example. It includes both the base image seen in the screenshot below as well as an XCF file if you wish to design your own. 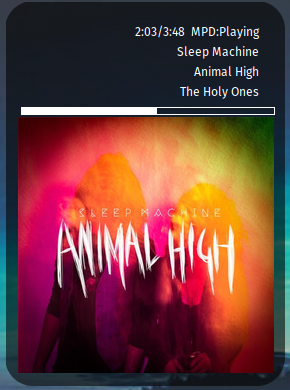 In kunst, the call to sxiv does not include the -S 2 switch. On my Debian system, without that switch, sxiv does not change the image once loaded.

Unfortunately, if sxiv tries to reload the image at the same time that a new one is being loaded, it aborts. There is a PID check built in to vindauga that relaunches sxiv if it’s closed. If it is relaunched, it loads back to the default location (or location specified in the rc file).

I use this configuration with my OpenBox:

Or if you don’t want to move it around, and have it be below other windows:

The artist images that Cantata fetches are - for me at least - frequently not correct. I’m not sure why, honestly. But I figured that since I’m pulling down the artist images anyway and storing them in the cache directory, I might as well use them. The script cantata-helper.sh reads vindauga’s rc, then symlinks the appropriate artist images from vindauga’s cache.