A bash script to get the weather from OpenWeatherMap and output to the terminal, Openbox, or HTML

A bash script to get the weather and forecast from OpenWeatherMap and output to the terminal, Openbox, or HTML

Additionally, a way to put that information onto an image (see the weather_image subdirectory). 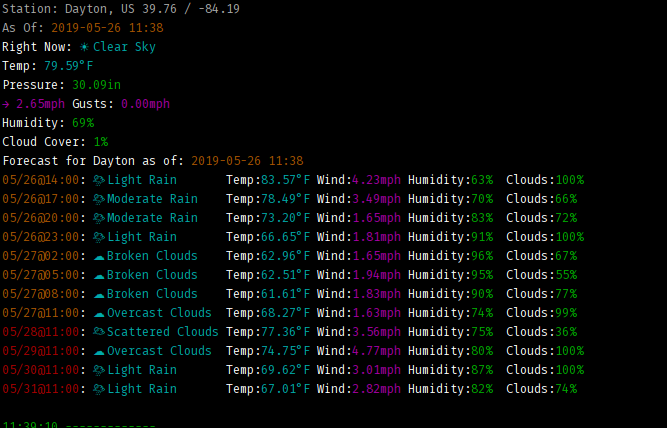 weather.sh gets the current weather from OpenWeatherMap and displays the results to the terminal, HTML, or for an OpenBox pipe menu. It will calculate (if appropriate) the “feel like” weather by calculating the wind chill or heat index. A great deal of basis for this script comes from BashWeather, bash-weather, and many more that I forgot to save the URLs of.

forecast.sh gets the forecast from OpenWeatherMap and likewise displays the results. OpenWeatherMap forecasts are at three hour intervals (0800, 1100, 1400, etc). It displays all forecasts for the next twenty four hours, then displays the closest time forecast for the day after that. For example, if it’s 1136 (as I’m writing this) it shows all forecasts through the 1100 forecast the next day, then the 1100 forecast for each subsequent day. Options and .rc file are the same as for weather.sh.

If you wish to show both together, simply execute:

This project is licensed under the MIT license. For the full license, see LICENSE.

Run weather.sh or forecast.sh with the appropriate commandline switches (below). If the current conditions do not qualify for the heat index or wind chill, it is not displayed.

weather.sh and forecast.sh can be started with the following command line options:

Note: If the OpenWeatherMap API key is specified from the command-line, it will override the API key set in the file.

Note: It is STRONGLY recommended to use the City ID from OpenWeatherMap instead of a city name. Instructions on finding your city’s City ID here .

I have a single line config for my secondary screen with the weather config in it:

The conky output is currently limited via code to just the next five outputs.