The only document-focused mailcap style utility with a wombat mascot.

The only cli document viewer with a wombat in a sombrero as a mascot. 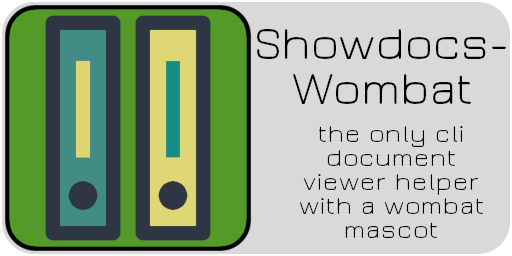 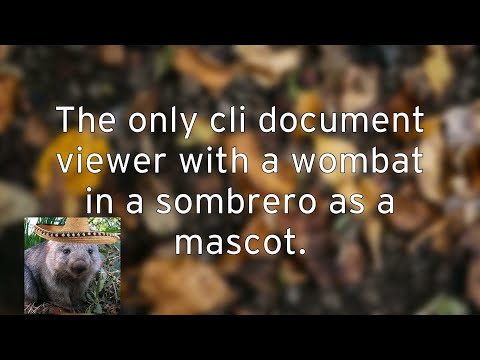 Very simply, this is a document viewer type version that plays a similar role as mailcap and other such utilities. Its focus is on displaying documents quickly in a terminal (or a popup terminal).

Inspiration taken from mutt.octet.filter for how to best match mimetypes.

Why should you use this instead of another mailcap type solution?

Why should you not use this script?

This includes all of the helpers as well; the “core” first four are for the script itself and are probably already installed on your system. Installing all the helpers is obviously not necessary; however, doing so will result in everything working out of the box.

Install via Apt, but check the version.

These can be installed (if you have python and pip installed, naturally) by typing:

These are really optional, but are nice:

Clone or download the repo. If you downloaded it, unarchive it into a directory, then make a symlink into your path. Place lynx.lss in `$HOME/.lynx

Examine showdocs.sh to determine if the “helpers” I use are the ones you wish to use.

The most basic usage is to invoke

The program can handle most unescaped filenames - see the demo - but some special characters (such as #) must still be escaped, like so:

Occasionally a different viewer is invoked - such as when the devour function is used inside tmux. That is usually for aesthetic reasons (such as line wrapping).

To invoke the MySQL viewer, the command should be:

If you invoke it under tmux and have TDAB installed, the devour script will automatically be invoked, creating a new maximized pane with your document in it.

From a GUI File Manager

The old way of calling this script from a GUI viewer (such as Double Commander which spawned a new window was something like:

That will still work, but you can simplify (and enhance) the experience by using the -g switch, making the command something like this:

Not only will it launch a new xterm, but if you have wmctrl and xseticon set, it will decorate the window with the script’s icon and name.

If you would like to streamline and consolidate your mailcap style experience, you can use showdocs in place of your regular mailcap file.

If offered an URL, showdocs will follow any redirection (if muna is installed and in your $PATH). If there’s a filename with extension already there, it will grab it and process the file locally (using URLPortal if needed). If there is not a file extension specified on the URL, it will download the file, then use mimeinfo to try to figure out what it is, rename it appropriately, and process it locally (using URLPortal if needed).

This means that you can pass filenames or URLs straight to showdocs and use the same flow.

I’m sure I’ve missed some major mimetypes that are odd (like how “vnd.ms-asf” is a mimetype for WMV files), please let me know what I’ve missed!

If you wish to colorize your output - particularly of sourcecode - you should use .lessfilter. There’s a good tutorial at Miskatonic.org.

If it cannot find a match, and you have the URLPortal script from newsbeuter-dangerzone in $PATH - see this file if you don’t care about the rest of the repository - it will then hand everything off to that program. In that way, it can handle a lot of other datatypes as well without getting too complicated. Feel free to substitute your own “mailcap” style solution instead.